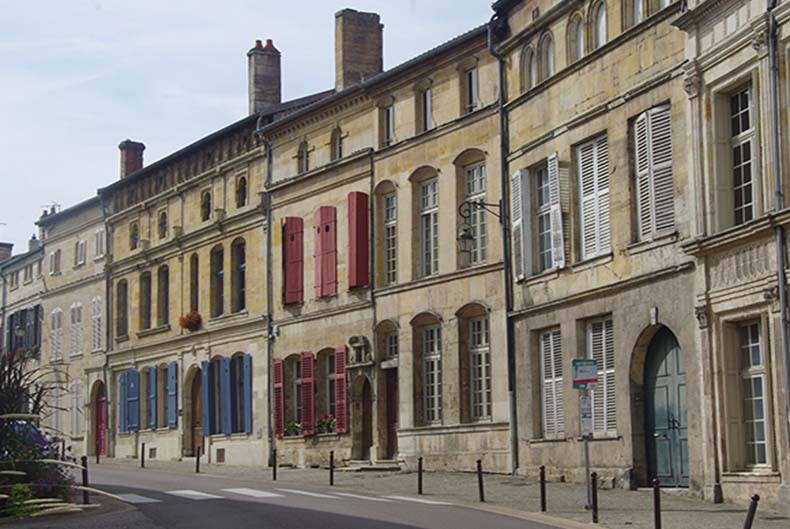 The Upper Town – an architectural treasure dating from the Renaissance period.

Make a tour through Bar-le-Duc heritage and enjoy one of the most beautiful Renaissance districts in Lorraine. See its private mansions, a reminder of a rich history. The freestone used to build them gives them a very particular colour and an atmosphere all their own. The uniformity of the architecture has been beautifully preserved by making this a “conservation area”, ensuring that the buildings come under the protection of architects at the Bâtiments de France authority.

On Place Saint-Pierre, you’ll see the Flamboyant Gothic St. Stephen’s Church (église Saint-Etienne), which houses two of the most striking works by Ligier Richier – “Calvary” (Le calvaire) depicting Christ and the two thieves and, more particularly “The Corpse” (Le transi), a memento mori depicting a skeleton with its left arm raised and its hand holding its heart.
The work was commissioned from the artist by the wife of René de Châlons, who wanted a reminder of her husband four years after his death.

On the way, you’ll see major historic monuments such as the Romanesque gate, the clocktower, part of the town’s fortifications, most of which were demolished during the reign of Louis XIV, and the observation platform on Rue des Grangettes which gives a 180-degree panoramic view of the lower town. Further down, the “New Castle” was built on the esplanade of the mediaeval castle in the 16th century; it now houses the collections from the museum (Musée Barrois).

Musée Barrois, the former castle of the Dukes of Bar

Step into this museum in the heart of the Renaissance district in Bar-le-Duc and you’ll find exhibits dating from prehistoric times to the 20th century, with special emphasis on local heritage. The museum also hosts a number of temporary exhibitions during the year and games are available for children in the form of booklets. During the school holidays, children can take part in “Little Ligier” arts and crafts workshops based on the museum’s collections or the town's heritage.

One of the “must see” events in Meuse is the Renaissances Festival held every year during the first weekend in July. It brings together an unusual, and mind-blowing, selection of street entertainment, circus acts and music. Every year, an innovative programme creates magical meetings between performers and the general public in ways that are totally unexpected.

Text and more to read: www.meusetourism.com/en