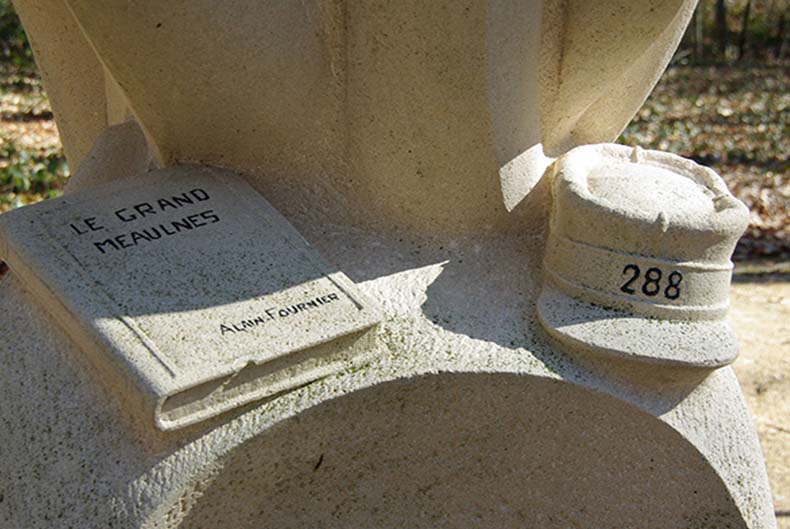 Henri-Alban Fournier, who later wrote under the pseudonym Alain-Fournier, was born on October 3, 1886 at La Chapelle d'Angillon where his parents were teachers. He spent his chilhood in the Sologne countryside. In 1891 his father became a teacher at Epineuil le Fleurel and young Henri was his pupil until the 5th grade. He then went away to boarding school at the Lycée Voltaire in Paris.

In 1901 he decided that he wanted to join the navy and he enrolled at the high school in Brest to prepare for the Naval School examination. One year later he changed his mind and instead prepared for his degree in Bourges.

In 1903 Alain-Fournier started his preparatory studies at Lakanal in Sceaux before his attempt at the entrance examination for the college of literature. It was here that he met his best friend Jacques Rivière. The two were to exchange important and passionate correspondence during the remainder of Fournier's life.
On August 24, 1909, Jacques Rivière married Isabelle, Alain-Fournier's sister and thus became his brother-in-law.
[...]
In 1910, Alain-Fournier went to work as a journalist for the Paris Journal. During this time he fell in love with Jeanne Bruneau, a seamstress, who would later provide the basis for the character of Valentine in his book Le Grand Meaulnes (in English, variously known as The Wanderer and The Lost Domain)
From 1910 to 1912, while working as the personal assistant of the politician, Casimir Perrier, Alain-Fournier worked on his book.

In May, 1913, eight years after their first encounter at the Grand Palais, Yvonne's sister arranged for the two to meet. Yvonne was now the mother of two children. His persistent love for her convinced Alain-Fournier that it was impossible for the two to be merely friends. They parted, never to meet again. It was then that Alain-Fournier started a love affair with Simone, an actress.

Le Grand Meaulnes was first published in the July-October 1913 issue of the Nouvelle Revue Française and then as a book. Although nominated for the prestigious Goncourt Prize, Le Grand Meaulnes narrowly lost to Marc Elder's Le Peuple de la Mer.

In 1914 Alain-Fournier started work on a new book Colombe Blanchet, which remained unfinished as he had to join the army in August 1914. One month later he was killed. He was just shy of his 28th birthday.

His body remained unidentified until 1991, at which time he was laid to rest in the cemetery of Saint Remy la Colonne.