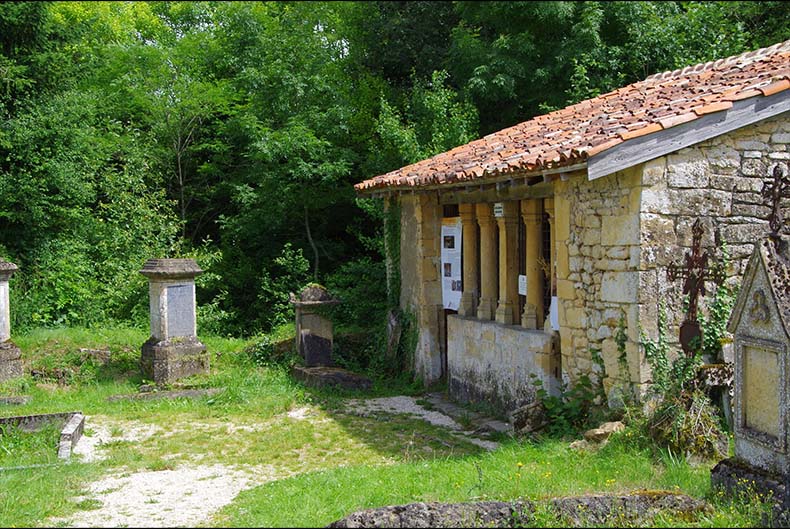 Saint-Hilaire church and cemetery in Marville

The Saint-Hilaire church and cemetery in Marville are in fact a superb museum of funerary art with astonishing and highly moving stone tombs. They enable us to better understand the Cult of the Dead that lasted from the Middle Ages to the Baroque period. It still is surrounded by its beautiful graveyard with tombstones and remarkable ossuary.

From the website: www.smg-authie.co.uk/:(not available anymore)
I had told Florian that he was in for a surprise at Marville and as I drove up the hill opposite the town had my fingers metaphorically crossed that the site lived up to my expectations. You don't get too far away from either beer or dead people on a jaunt with me and Marville is no exception.

Apart from the fact that it was on my research itinerary the item on the map that had drawn my attention to the town was its cemetery on the hill opposite.
One of the oldest in France it is one of the few (if not the only) classified structures of its kind. Situated on the site of an old Roman temple dedicated to Mars, the 12th Century church of St Hilaire served as the parish church up until the 13th century when the townspeople decided that it was a hell of a long walk and constructed a new within their midst.
The cemetery however remained in use and contains numerous gravestones from the 15th to the 18th centuries and these are particularly rare. My hopes about a worthwhile visit were immediately raised as we parked the car up. Once the trees have lost their leaves there must be some fine views towards Marville. The cemetery is entered near the guardian's cottage and thankfully there was a plan showing the lay out.
In medieval times there was a leper colony nearby whose deceased added greatly to those of the local residents. Back in the old days the custom was to gather the bones in an ossuary but of course they slowly took up more and more space and the problem with the cemetery was that its position meant that it could not be expanded.
We couldn't get into the church but it would seem that around 1875 some of the more precious headstones were moved into it and this was the first section of the ensemble to be classified as a historic monument.
At the entrance to the cemetery there is a crucifix called the Christ of the Lepers and within the grounds there is Piéta dedicated to their suffering. This latter dates from the 15th century as do the four stones placed in front of it showing the 11 apostles - Judas is missing. Around the church is the historic section of the graveyard and although there are a few upgraded plinths they are in the minority whilst the yellow chalk used in many of these headstones and sculptures adds to the renaissance feel to the churchyard.
I was rather surprised to find amongst these old stones a line of new crosses all dedicated to Canadians, however their presence would be revealed further on.
We had now reached the dot on my map and it was time to see if Florian would be intrigued.

The Ossuary of St Hilaire


In 1890 the cemetery keeper, Constant Motsch decided that the simplest method of creating more space was to recover the bodies from the older graves that did not have a perpetual concession.

He did not however just gather up the skeletons but also organised and categorised them but kept only the skulls and longer bones. Not wishing to mix the lords and notables of the land amongst the commoners he placed their skulls in boxes which he marked with the details of the owner. There are 29 of these men and women who all died between 1780 and 1860. Their skulls look out through their boxes like the faces on a clock.
Sadly the boxes have weathered in time, but ultimately they and their contents serve as a reminder that in death, the great and the lowly are treated with an equality that may not have been their lot whilst alive.
Above their heads reads: We were like you - You will become like us
Florian could hardly talk about anything else for the next half an hour so I can put that wee pause down as a success.