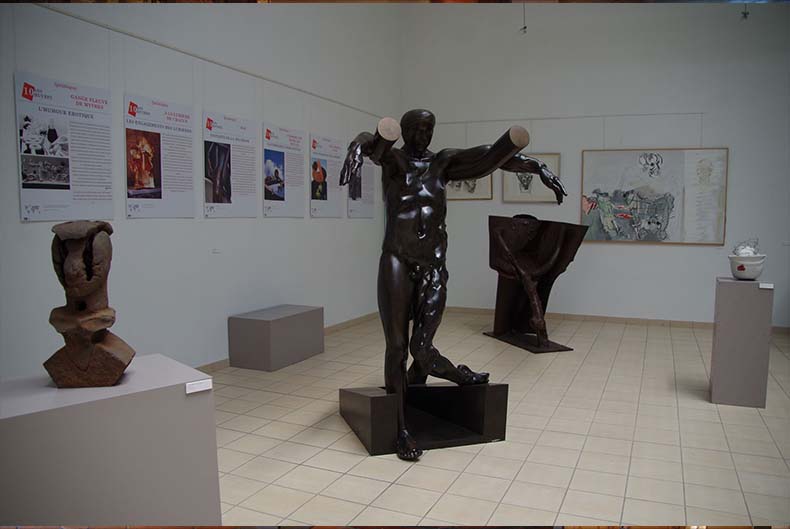 Jean-Robert Ipoustéguy (January 6, 1920 – February 8, 2006),a figurative French sculptor, was born "Jean Robert" in Dun-sur-Meuse. His artwork had a distinct style, combining abstract elements with the human figure, often in the écorché style of French anatomists. The American writer John Updike once wrote that he "may be France's foremost living sculptor, but he is little known in the United States".

He and other critics noted sharp contrasts between rough and smooth, abstract and realistic, tender and violent, delicate and crude, and many other paired oppositions in his artwork, and his recurrent themes of sex, birth, growth, decay, death, and resurrection. Ipoustéguy was unafraid to depict emotional intensity in a sometimes controversial way; several of his major commissioned works were rejected, but later installed as planned, or in other locations.

During his life his works could be found amongst the most eminent public collections in the world.: Tate Gallery, Gruggenheim, Berliner Kunsthalle, Centre Pompidou …and his monumental sculptures were installed in the great artistic capitals: Tokyo, Washington, Paris, Berlin… The Ipoustéguy Gallery: Since 2001, the visitor has been able to appreciate forty of the most important works of the artist and to experience their expressive power: monumental bronzes, ‘intimist’ marbles or refined graphic works. To spent a beautiful day with Ipoustéguy look at:a day with Ipoustéguy Sorry, but the tourist office with the exposition of Ipoustéguy is closed.

Dun-sur-Meuse Haut
Dun sur Meuse has a great part of the collection in the permanent exposition in the  CENTRE CULTUREL IPOUSTEGUY, 3 bis Place de la Gare, 55110 DOULCON.
Openinghours: WE ARE SORRY, BUT THE TOURIST OFFICE AND EXPOSITION HALL IS NOW A DAYS CLOSED AND ONLY OPEN AFTER A TELEPHONE CALL. CLIENTS OF MOULIN LE CYGNE CAN ASK US FOR ASSISTANCE.
Internetsite artist:: www.ipousteguy.com/ Text: Wikipedia.