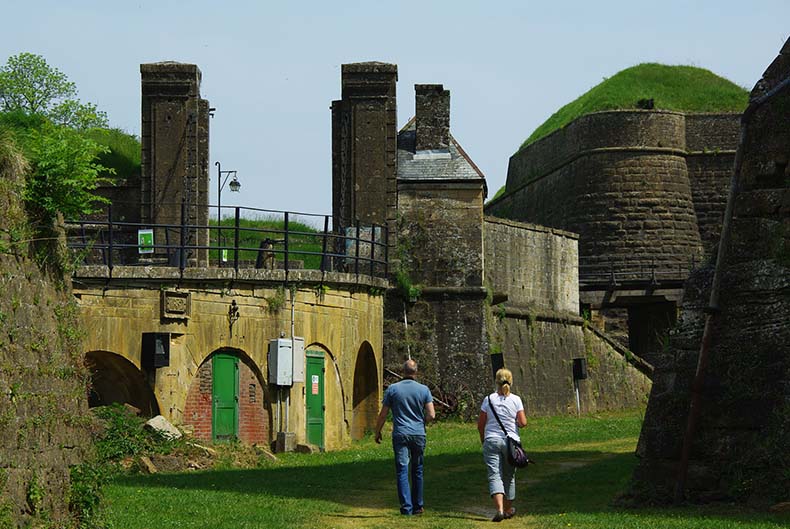 The citadel of Montmédy stands on a hill above the town that offers a good view of the surrounding country. The main entrance road winds up the hillside from the town below, although there is also a path that runs directly up from the town. This path is protected on both sides by the walls of the town, which extend up the hillside to meet the citadel. The basic form of the citadel is that of a large bastioned triangle.

Very little of the town's defences remain to be seen, though if you look hard there are bits and peaces (I found two bastions, one of which had been made into a public garden). The citadel however, is intact and you can walk the walls by entering at the tourist information (about 4€).
Although a little overgrown, the defences are in good condition and well worth visiting. The 4€ entrance fee gives access into two museums as well as the walls of the citadel, one is an art gallery and the other is a very interesting museum on fortifications which contains a relief map of Montmédy under siege in 1657. The citadel of Montmédy is one of my favourite fortresses.
Even though it is neither the largest nor the most impressive citadel in France, it has the more unusual style of fortification built by the Spanish, coupled with the natural beauty of north Lorraine, one of my favourite areas of France.

The citadel has an unusual character, having been fortified gradually and almost continuously for over a century by the Spanish. Legend has it that the entrance demi-lune, an ally of the Spanish. The demi-lune was constructed between 1648 and 1652, so Vauban would have been 15-19 years old when it was being carried out. It is highly unlikely that he was involved, though not of course impossible.

A walk of 2 km is available round the walls, admiring the breathtaking panoramic views and finding out about the life of the soldiers and the citadel’s system of defence (artillery bunkers, caponiers, powder magazines etc.).
Download: round walk citadel