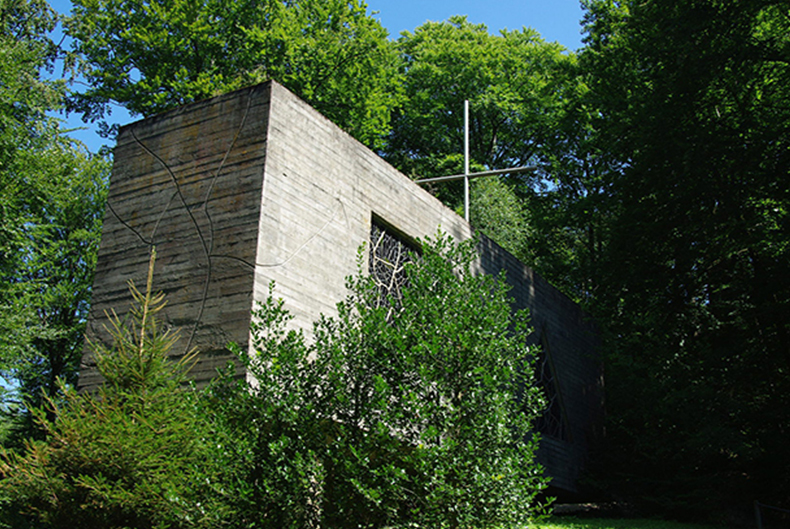 Beaulieu-en-Argonne: The hermitage of Saint Rouin chapel with its contemporary style, was designed by Rayssinger and inspired by Corbusier and Henri Matisse. Stained glass by a young Japanese girl Kimie Bando. The altarpiece of the Assumption dates from the eighteenth century.

A place of calm and reflection, of amazing beauty, a place of wonder and admiration.

Saint-Rouin (originally called Chrodingus or Rondingus) was an Irish missionary sent to the European mainland in the 6th century to convey the Christian message. In the Argonne he found an ideal site to settle on a dominant hill. That was at the place where Beaulieu-en-Argonne is still located.
However, local warlord Austresius chased him out . After a trip to Rome, Saint-Rouin returned to the Argonne. He established a monastery in this time with the support of Austresius after calling on Saint-Rouin for a disease in his family.

Over the centuries there were numerous chapels in this peaceful place. Hermits came and went. By the French Revolution around 1790 everything was forfeited.
The monastery flourished quickly. At the end of his life, however, Saint-Rouin retired in a valley near Beaulieu-en-Argonne, the present place of the hermitage. After his death, the resort became a destination for pilgrims. Miracular forces were attributed to the water of the source.
It took until the end of the 19th century before a pilgrim remained in St Rouin and the buildings were restored. However, in 1946 the chapel was so dilapidated that it almost collapsed.

The current chapel dates back to 1954-61 and was built by the architect Père Rayssiguier Révérend, inspired by Le Corbusier's ideas. A concrete structure, cube-shaped on hips/poles with a central altar.
The glass windows that give the cold concrete a warmer soul were designed according to the drawings of an 8-year-old Japanese girl Kimié Bando. The main building is now a house that is mainly available for retreats. The last 2 hermits and the Abt Hannequin are buried at the foot of the chapel.

The hermitage has been on the National Monuments List since 1994.

Grand Randonnée 14 runs along the hermitage.