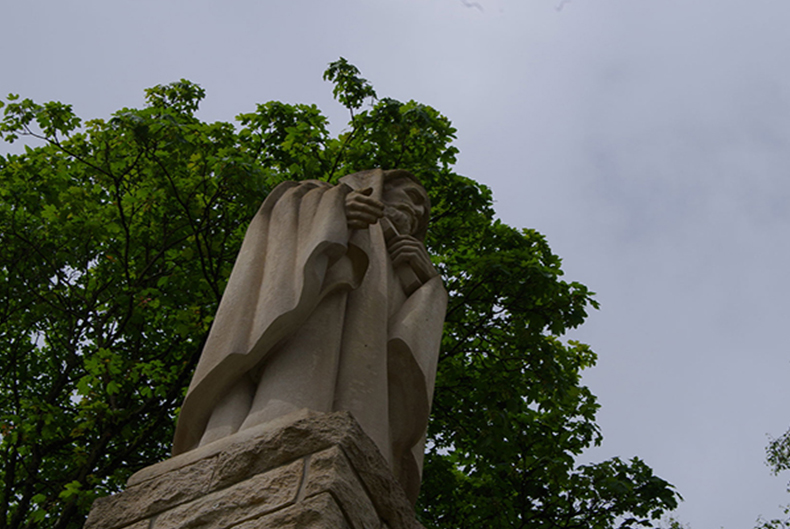 Margut: Hermitage in St. Walfroy founded by the hermit St.Walfroy in the sixth century. It is a place of pilgrimage to be reached by a path consisting of fourteen stations of the cross. At the summit, 1,148 feet above sea level, one discovers a remarkable view of the surrounding areas and as far as Belgium.

Hermitage in St. Walfroy founded by Walfroy Stylites the sixth century. It is a place of pilgrimage for Catholics. It is reached by a path consisting of fourteen stations of the cross. At the summit, 1,148 feet above sea level, one discovers a remarkable view of the pays d'Yvois.

The history of this site was hectic since its creation by St. Walfroy. After the death of the Stylite, other hermits continued his work. In 1237, the chapel was entrusted to the Abbey of Orval. In 1855, Thomas-Marie-Joseph Gousset, then Archbishop of Reims, bought the property, thanks to the generosity of the Diocese of Reims and neighboring dioceses, Namur and Verdun. He entrusted the house to the Abbot Rondeau, encouraged by Jean-Marie Vianney, who he met during a visit to Ars. In 1868, the Vincentians made a house hermitage retreat.

In 1874 was built the Stations of the cross (restored in 1989) and then in 1880 the Chapel of Our Lady of Prompt Succour, (always located on the Plateau). 1906 saw the arrival of the canons of Bihéry et Couvert, diocesan missionaries. In 1920, they rebuild the buildings burned in 1916.
In 1949, Canon Couvert rebuilt the chapel that was destroyed in 1940, he is the chaplain.
In 1958, the Oblates of Mary Immaculate ensure the pilgrimage and service of neighboring parishes until 1980. In 1989, The Brothers of the Auxiliary Clergy arrive, and were installed Sept. 10 by Bishop Balland.
In 2002, the Brothers of the Auxiliary Clergy left St. Walfroy. Since that date, the management has changed and the hermitage buildings have been renovated and adapted.

The site has increased its hospitality vocation for groups (pension sessions for pilgrimage or spiritual stop individual home). The Hermitage now has 70 beds, 41 rooms, 21 with integrated health facilities and ten rooms for those with disabilities.
•Church of St. Walfroy. The church was rebuilt in 1957 (architect M. Poirier), while incorporating the apse of the old church. Its exterior shape reminds the pilgrim of a shelter-tent. The interior pillars and frames evoke the Ardennes forest.
Above the door, a large canopy of Gaudin: it symbolizes the struggle between good and evil, of the faith against 'Idol Arduina, Marais' highest Church in the storm. It contains the tombstone of Canon Couvert. A broken slab is all that remains of the location of the tomb of St Walfroy, destroyed by war and lost.

This beautiful hill with excellent view over Belgium can be found close to Margut.

More information about this beautiful place on: /Mont_Saint-Walfroy